If you are looking to run Adeptus Titanicus: Dominus on your PC, it's good to take a look at the minimum requirements and see if you can REALLY run it. 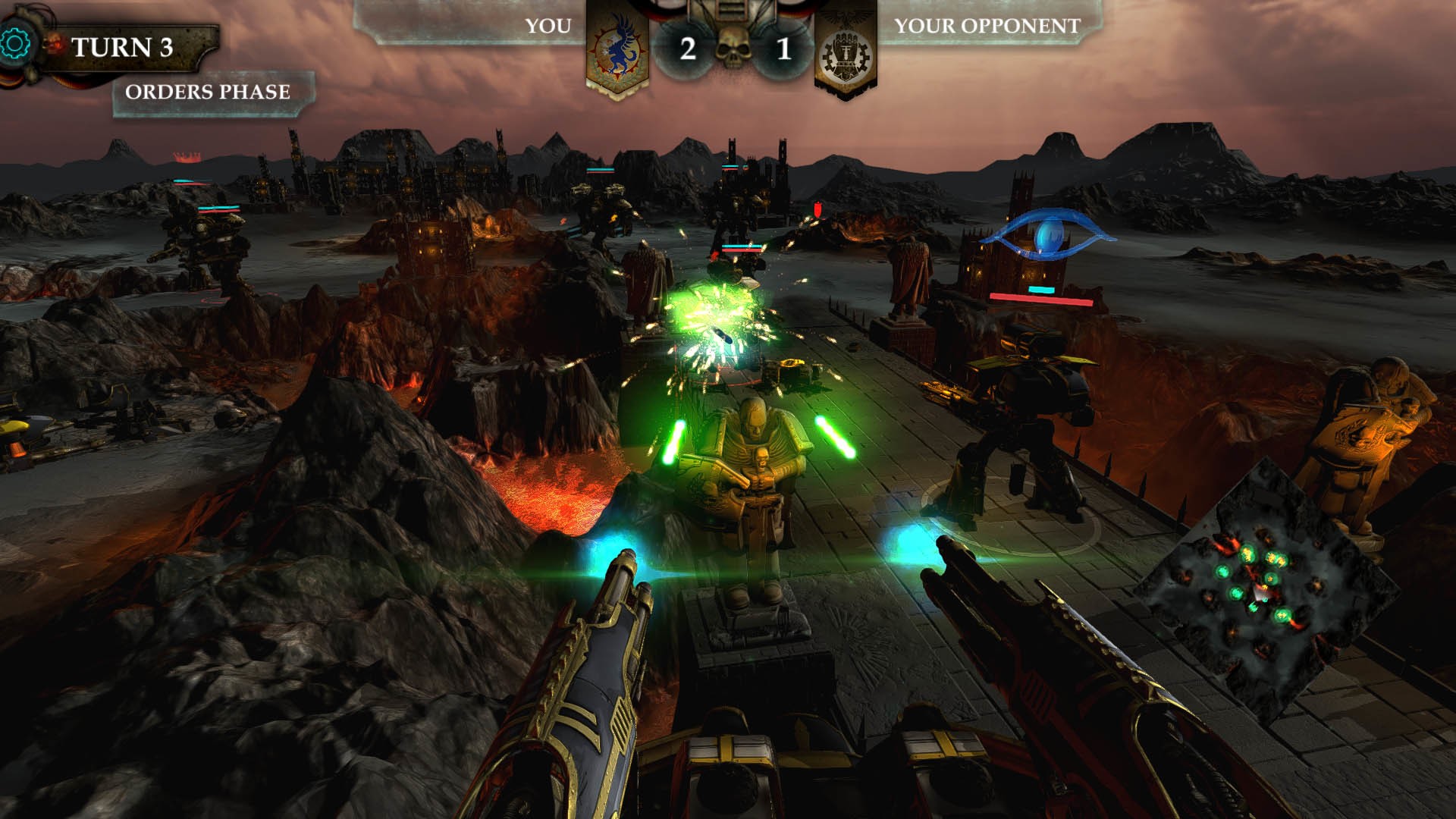 New anti-armour Warhound variant added! We've added a new Warhound variant to Adeptus Titanicus: Dominus. This latest Warhound variant packs twin Turbo Laser Destructors for great anti-armour capability! Updated! New Warhound variant and new weapon system added! Adeptus Titanicus: Dominus has just received its latest Titan variant—a Warhound that combines an Inferno Cannon for short-range work with the new Turbo Laser Destructor weapon system! This new Warhound variant is available for deployment right now in your single- and multi-player games. The Turbo Laser Destructor is the smaller cousin of the Laser Blaster. It offers a lesser rate of fire and a reduced range when compared with its larger peer, but also comes at a lower points cost than the beastly Laser Blaster. The Turbo Laser Destructor is a potent weapon and favoured by Warhound crews needing enhanced anti-armour capability over what the Vulcan Mega Bolter can provide. The Turbo Laser Destructor is primarily intended for use on Scout Titans, which cannot carry the weight of a Laser Blaster; however, the Turbo Laser Destructor can also be mounted on Battle Titan carapace, enabling its use on Warlords and Reavers. New Warhound variant added! Adeptus Titanicus: Dominus has been updated again, this time adding a new Warhound Titan variant armed with dual Vulcan Mega Bolters! The new Warhound variant is available to play now in both single-player and multi-player! New Warlord variant added! Adeptus Titanicus: Dominus has just been updated again a add a new Warlord Titan variant armed with twin Volcano Cannons and dual Laser Blasters. Available to play now in both multi-player and single-player Skirmish modes! About the GameAdeptus Titanicus: Dominus, the 3D turn-based strategy PC game adaptation of Games Workshop’s classic Titan Legions tabletop game, puts you in control of the greatest weapons available to the Imperium of Man, the mighty Titans of the Adeptus Titanicus! Coming soon to Steam Early Access, Adeptus Titanicus: Dominus features a Skirmish mode against an AI opponent for single-player and an online multi-player mode. Upon full release, the game will also offer an exciting single-player campaign. Control a force of Titans In Dominus, choose to control a force of Titans from the loyalist Legions of Astorum (Warp Runners), Gryphonicus (War Griffons), Crucius (Warmongers) or Osedax (The Cockatrices), or choose from the traitorous Chaos Legions of Mortis (Death Heads), Vulcanum (Dark Fire), Damnosus (Lords of Ruin) and Fureans (Tiger Eyes). ⠀ ⠀ ⠀⠀⠀⠀⠀⠀⠀ Futuristic warfare Utilising the tabletop Titan Legions rules system as its foundation, Dominus features an easy-to-play yet deep strategic and tactical experience via its streamlined command system, which sees you and your opponent giving activation orders to your Titans, resulting in fast-paced battles. It successfully marries this strategic play with action sequences as the gargantuan Titans exchange volleys of cannon shots, blistering laser blasts and other epic, super-powered weapons of the far off future! Easy to play, challenging to master While luck will play a part as you trade blows with your foe on the futuristic battlefields of the 41st Millennium, your path to victory lies in your army list building and how you manoeuvre your units upon the battlefield. As a commander, you will have access to the most classic, iconic Titan units from the Warhammer 40,000 universe: Warhounds, Reavers and the gigantic Warlord, for both the Imperial and Chaos factions. Each of these Titans will have multiple variants available, featuring different weapon configurations, thereby enabling your Titans to fulfil the battlefield role your strategy demands. A living battlefield Adeptus Titanicus: Dominus will feature a 'living battlefield' that employs unit and battlefield animations to show players the Warhammer 40,000 universe they know and love.ABOUT MEMBRAINEMembraine Studios is a small indie team based in Sydney, Australia. The team is Glenn Osmond-McLeod and Mark Sheppard - both avid tabletop gamers and indie developers with more than 16 years game development experience between them. In recent years, Membraine has focused on the turn-based strategy genre.CURRENTLY PLAYABLEThe current Early Access build of Adeptus Titanicus: Dominus features the following: A true-to-source adaptation of the Titan Legions tabletop rules, streamlined for PC Twelve Titan variants, three each for the Warlord, Reaver and Warhound Four Loyalist Legios and four Chaos Legios to choose from Three battlefields, each with distinct environments Destructible terrain features - watch buildings collapse as stray weapons fire obliterates their structural integrity Several game modes with multiple victory conditions - there is more than one way to win 12 fixed-forces scenarios to challenge your skills as Legate of a Maniple of Titans Discover the strategic depth underlying the game, with points-based army list building in Skirmish and Multi-Player via the Detachment BuilderTHE ROAD AHEADOver time, we plan to release a series of updates to the game as it progresses towards the full version of the title. Update One (currently in development) The first major update planned for Adeptus Titanicus: Dominus focuses on gameplay additions:: Stress (suppression mechanics) - an additional layer of tactical concern that adds depth! Close Assault and Fire Fight - engage with your enemy in deadly close-quarters combat! Steam Achievements (first grouping) A loot-drop system (initial implementation) General quality-of-life improvements Future updates The scope of the next major updates has not yet been announced. Follow us for news about the next exciting instalment of Adeptus Titanicus: Dominus' Early Access journey!