If you are looking to run Galaxy on Fire 2 Full HD on your PC, it's good to take a look at the minimum requirements and see if you can REALLY run it. 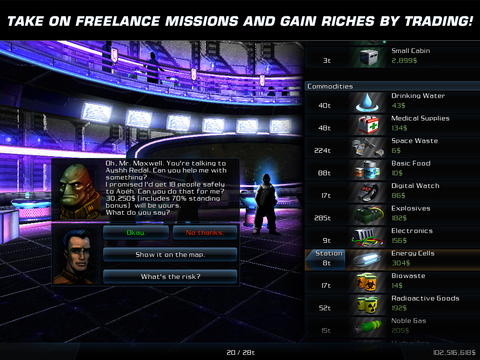 Galaxy On Fire 2 is the second part in its series and the sequel to the original Galaxy On Fire. It is a game about futuristic spaceflight. ###Plot The protagonist is Keith T. Maxwell, a space pilot who was also the main character in the original game. When his ship malfunctions, he accidentally travels thirty-five years to the future. There, a space trader Gunant Breh rescues Maxwell, hires him and gives him a new ship. Keith has to gather ore, fight against pirate attacks and investigate lost space stations. ###Gameplay The player navigates the protagonist's ship through space. He or she can mine ore to gain money, explore multiple star systems, fight pirates, and complete other missions. The 'jump gates' connect the star systems, allowing the player to travel between them instantly. However, within the systems themselves, the player has to pilot his or her ship manually. While in spaceports, the player controls Maxwell himself. There, the protagonist can sell his ore and loot, buy upgrades for the ship, such as better engines or weapons, repair the ship, or even buy an entirely new vessel. There's also a bar, in which the NPCs can provide the main character with optional quests that earn him money. ###Full HD version The original Galaxy On Fire 2 was developed for mobile devices. The Full HD version features enhanced graphics and can run on a PC. This version has a slightly reduced content and does not include the DLCs and some of the original game's star systems.

Galaxy on Fire 2 Full HD is avaible for iOS, macOS, PC and Android.