If you are looking to run NBA 2K16 on your PC, it's good to take a look at the minimum requirements and see if you can REALLY run it. 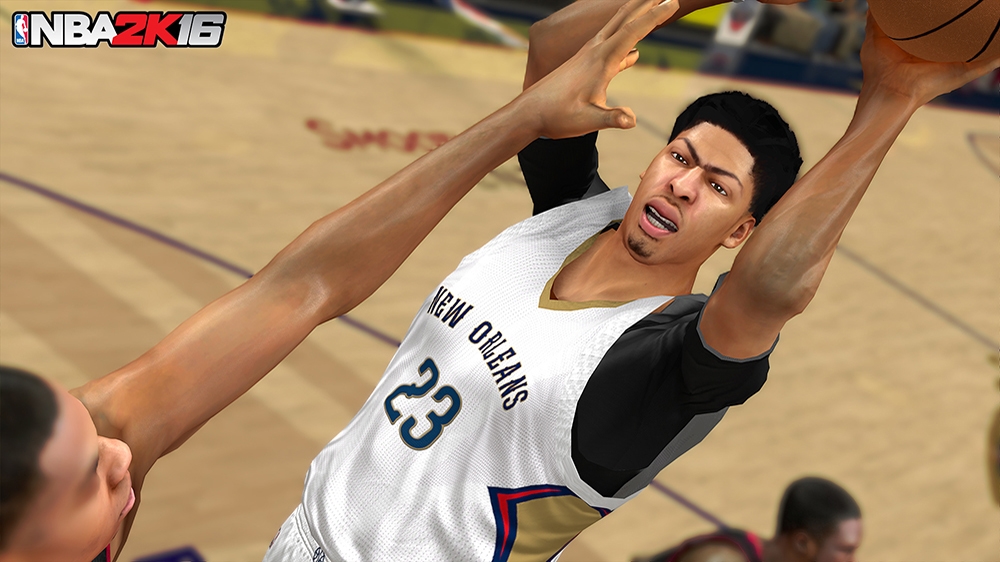 Michael Jordan Special EditionThe NBA 2K16 Michael Jordan Special Edition includes the following bonus content: Digital Jordan shoes for your MyPLAYER Jordan T-shirt for your MyPLAYER Jordan Jersey for your MyPLAYER 30,000 Virtual Currency MyTEAM VIP+: 3 Emerald packs each with a guaranteed Emerald player AND a new Special Edition Exclusive Moments Card About the GameThe NBA 2K franchise is back with the most true-to-life NBA experience to date with NBA 2K16. Featuring an all-new MyCAREER experience written, directed and produced by acclaimed filmmaker Spike Lee. Guide your MyPLAYER through the complete NBA journey, take control of an entire NBA franchise, or hone your skills online competing against gamers from around the world. With animations that provide smoother movement and more realistic articulation, and a unique cover design featuring NBA stars Stephen Curry, Anthony Davis and James Harden, it’s certain to be the most authentic NBA gaming experience yet. MyCAREER - A SPIKE LEE JOINTOur most intense first-person narrative to date, written and directed by Spike Lee. For the first time, manage your off days and earn bonus content through connections, endorsements and a live practice environment. 2K Pro-AmA groundbreaking new mode featuring fully customizable teams and 5v5 tournaments livestreamed on NBA 2KTV. Join forces with friends to create the perfect squad all the way down to custom logos, uniforms & arenas, or walk on and join any open game. ENHANCED GAMEPLAYA new motion engine generates smarter, hyper-realistic movement plus new ball & rim physics and player collisions, leading to a more intense and authentic on-court experience. PLAY NOW ONLINEThis year, online head-to-head games matter. For the first time, your online head-to-head record will determine whether or not you advance to higher levels. As you level up, you’ll unlock some of the greatest teams from NBA history to use in your games. FEATURED DJsDJ Khaled, DJ Mustard and DJ Premier produce our biggest soundtrack to date, featuring 50 dynamic tracks across 5 playlists and exclusive cuts from each DJ. PLAY WITH MODERN LEGENDSStep onto the court with 12 new legendary teams, including some of the most epic squads from the past 15 years. MyPARKBreak ankles, drop dimes and create a street legacy at one of three newly enhanced parks. Show off your game to the world in new live-streamed competitive events. MyTEAMCollect past and present NBA players and customize your perfect team to go head-to-head in one of five unique game modes. Enjoy an all-new 3-on-3 online street mode called The Gauntlet, take your team online in Road to the Playoffs, face off against exclusive lineups in Challenges, or dominate current and historic NBA teams in Domination. Cards and game modes update dynamically throughout the season, ensuring a new experience every time you play. MyLEAGUECustom build the league you want. For the first time, MyLEAGUE Online allows you to create an online league with friends and gamers from around the world. Play a single season, or up to an 80-year franchise. Virtually every detail of your league is in your hands. MyGMA completely re-imagined franchise experience, the immersion and depth of MyGM has been elevated to new heights. New features for NBA 2K16 include team relocation, Advanced Team Building, Summer Leagues, 3-team trades, and much more. NBA 2KTV2K’s groundbreaking weekly TV show INSIDE a videogame returns for a second season. Featuring special appearances from NBA stars, coaches and celebrities, game tips with NBA 2K16 producers, user generated content & livestreamed competitions, and exclusive locker code giveaways.