Minimum requirements to run Need to Know on PC
ExploreFresh

Minimum requirements to run Need to Know on PC

If you are looking to run Need to Know on your PC, it's good to take a look at the minimum requirements and see if you can REALLY run it. 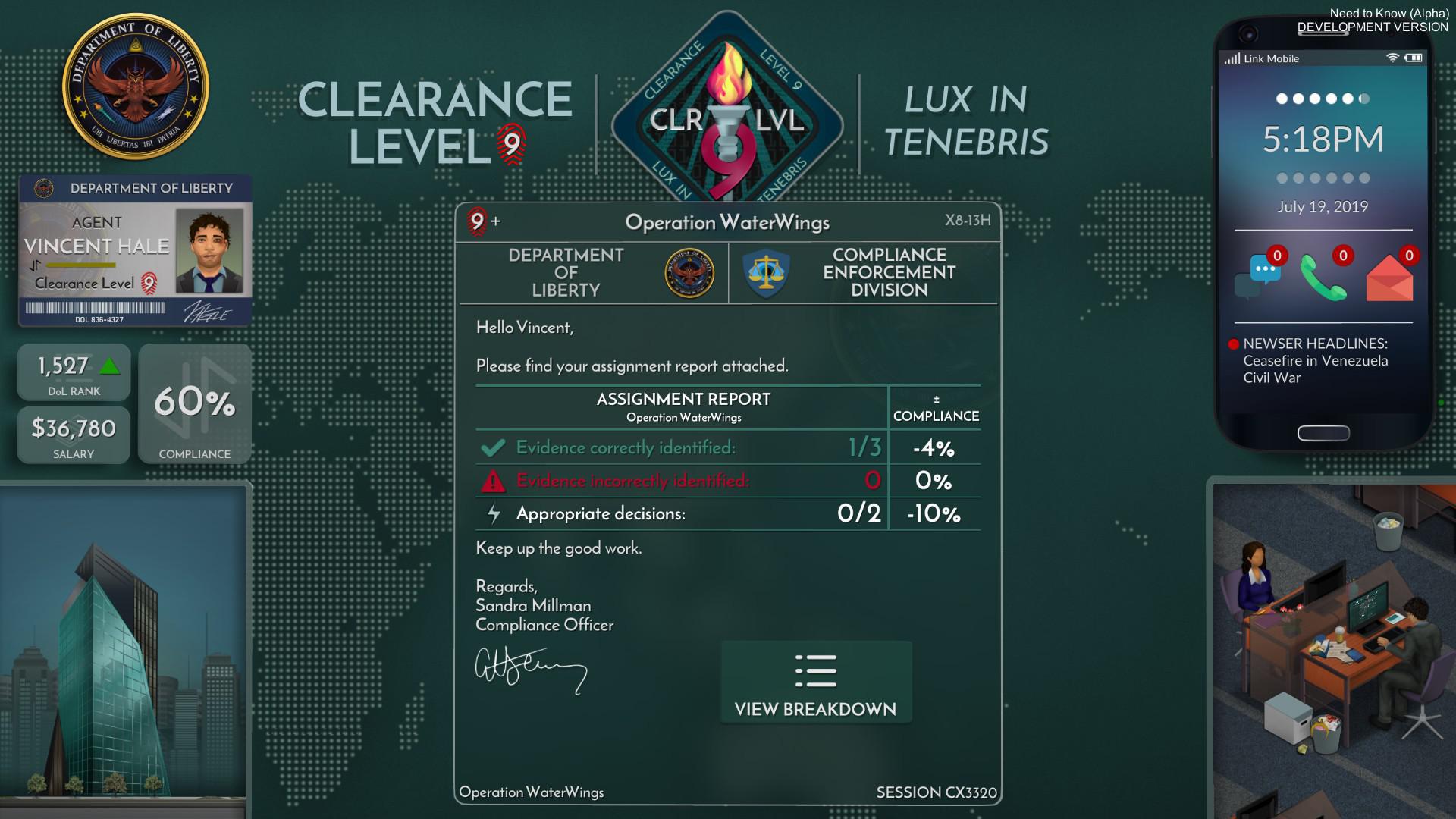 Watch the World. Welcome to Need to Know, the surveillance thriller sim that tests your ability and integrity within the shadowy, cutthroat world of a modern intelligence agency - the Department of Liberty. You must spy on people’s deepest secrets, pick apart their private lives, and determine how dangerous they are. You can also resist these suffocating privacy invasions by aiding underground groups in leaking data to the media. Or, you can just use all of that juicy classified information for your own personal gain. Your call. Need to Know emphasises story, and will sculpt the crushing growth of our real-world surveillance society into a meaningful, gripping journey. It critiques the system by passing the uncomfortable (or too comfortable?) mantle of power onto your shoulders, and testing which choices you’ll make. You’ll laugh, you’ll cry, you’ll sweat bullets under the searing blaze of an interrogation lamp.Features Assignments - To move through the game - and upwards in the Department - you must complete assignments, which require detecting or solving crimes. In each assignment, you spy on people, determine their guilt, and decide how best to deal with them. Missions are investigative puzzles, founded upon story, character and moral choices. Evidence - Each profile will contain a person’s digital footprints, from private emails to even more private text messages. Early Clearance Levels only allow you to access a target’s metadata or browsing history. As you progress, you bore deeper into their lives, with geo-tracking, shopping purchases, and even psychological analysis. Profiles - The Department doesn’t discriminate in its abuse of privacy, so you’ll encounter people from all economic backgrounds, locations, ages, and cultures. The DoL database, CodeX, is packed with citizens’ profiles, with colourful biographies, human flaws, and realistic dilemmas. Powers - Profile investigations will almost inevitably result in dual-choice decisions. Is the person suspicious or a model citizen? Guilty or innocent? As your Clearance Level increases, so does your authority and the breadth of your powers. Will you fuel your rise to power with searches, wiretaps, smear campaigns and abductions? Exonerate people you want to help? Or covertly undermine the Department from the inside? Outcomes – Your actions lead to in-game consequences, and at the end of every mission you’ll discover how your decisions affected each suspect. Clearance Levels – Everything hinges upon your Clearance Level. Impress your superiors, and they will promote you to a higher level, unlocking cooler (and creepier) powers, classified information, a higher salary and prestige. Personal life – Using a software backdoor, you can also access the CodeX database at home. Steal a corporation’s financial data to make a stock market killing, impress matches in online dating, or help underground groups subvert the Department of Liberty. Be as altruistic or as selfish as you want. Chapter-based storytelling – Gameplay intertwines with plots and subplots that extend throughout the game. Experience dystopian surveillance, but with the moral complexity of the modern world. Main plot - Above all else, your primary goal at the Department of Liberty is to find the mysterious figures responsible for the initial terrorist attack. Clues for this central case are buried throughout the story, and are mapped out in your Gray Day chart. Assets & Prestige – As your salary grows, impress and intimidate peers with new homes, purchases, and more. Design – A more clinical, traditional surveillance design is eschewed for colour and imagery. You should feel the fun and temptation associated with absolute power. A catastrophic terrorist infiltration of nuclear power plants leads to the formation of a new and immense intelligence agency – the Department of Liberty. Its primary goals are to hunt down those responsible, and prevent further attacks. It will carry these out with unprecedented access to people’s daily lives. In Washington, the DoL grapples with rival agencies for political supremacy, combats domestic threats, and ruthlessly silences its opponents. Join the DoL as a broke, directionless graduate. Every day you spy on people, collect their data, and determine their threat level. You have no intention of being sucked into the vortex of surveillance culture, but the deeper you go, the harder it is to escape…

Need to Know is avaible for Linux, macOS and PC.