If you are looking to run Orbital Strike: Arena on your PC, it's good to take a look at the minimum requirements and see if you can REALLY run it. 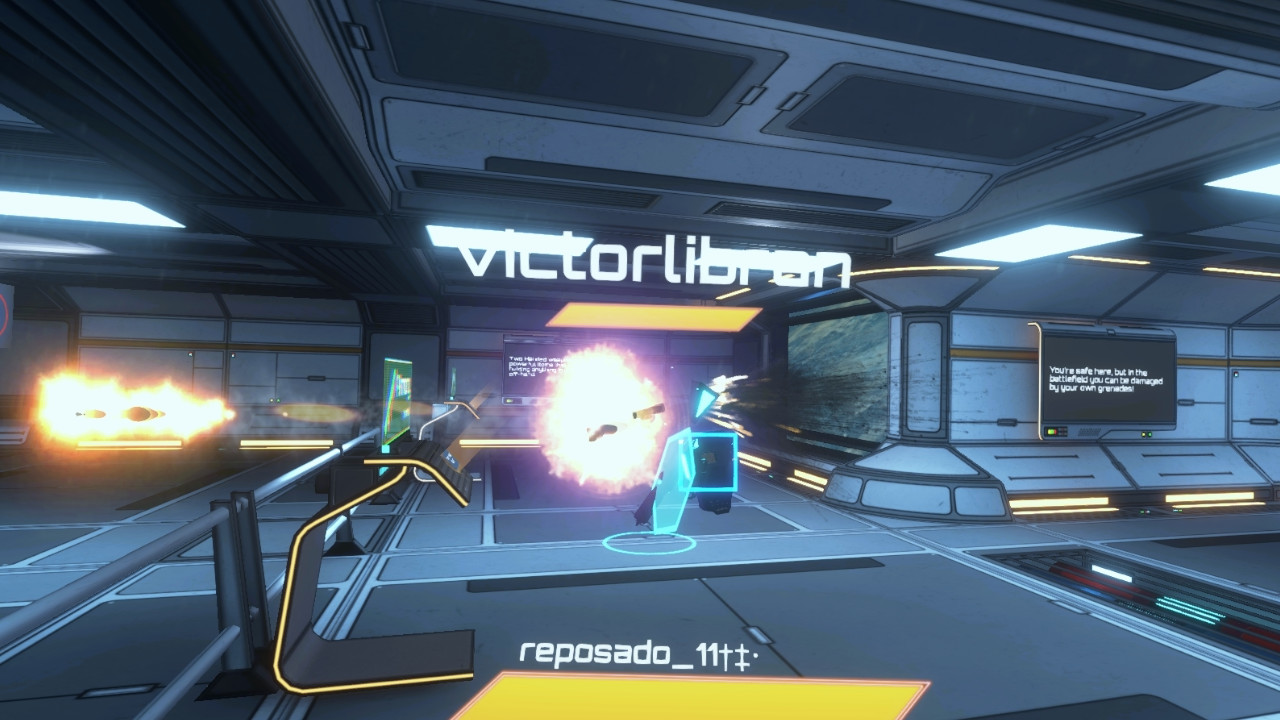 Dec 17th. New Rocket Launcher! About the GameOrbital Strike: Arena is a team-based, online shooter for the HTC Vive. We're out to create nothing less than the premier multiplayer game for virtual reality. Battle your way across no man's land and enemy AI drones. Use teamwork and tactics to attack the enemy base and destroy their turret defenses. Take out their AI Drone production capabilities before making your final push on the headquarters. Built for the HTC Vive and a room scale virtual reality experience: dodge, take cover, and use your shield to survive. Good Hunting!Features: Fight and destroy the enemy's Headquarters in a 3 vs 3 PVP game mode Battle AI drones and static turrets to invade the enemy's base Blaster, Auto-Blaster, Shotgun, Rocket Launcher, Shields, and Frag Grenades ready for Early Access Holster inventory with fast and fun weapons handling. Simply grab a new weapon from the holster to reload. Think tactically: use cover and flank the enemy using your teleporter Team and Global VOIP chat Public lobby servers. Hang out in our orbital station complete with simulation rooms and firing range Leaderboards and Ranked Mode games. Official dedicated servers for the best multiplayer experienceConstant Updates! Complete redesign of the teleport system. Dash teleport, cooldowns, graphical improvements, better use of cover and the tactical value is fully integrated into the gameplay. We've worked hard on this aspect and we believe it's the best teleport system yet in VR. Damage system redesign. Improved bullet netcode, bullet speed, removed bullet distance limits, added scattering as a stat for weapon balancing, and flexible function based damage modeling for all weapons. Inventory and weapon handling redesign. Massively simplified the inventory system to make gun-play more fun and exciting. Previously this was an overly complicated setup which required multiple menus and clicks to grab, equip, and shoot weapons. Now weapons are generated on the fly when needed. Simply click the trigger to grab, reload and shoot. Reloading is as quick as bringing the controller down to your belt and hitting the trigger to bring up a new gun at any time. Tactical reloads are possible and used guns are discarded automatically. Grenade redesign. Grenade throws are entirely predicted clientside now so they behave as what you expect from other single-player VR games. Grab, hold, and throw using natural motion. Drone and AI improvements across the board. Optimizations, targeting improvements, new graphical effects, and health bars. Added Voice chat. Hold right grab buttons for Global chat and left grab buttons for Team chat. We've remove the text based quick chat and replaced it with a VOIP system. As always, we route the voice data through our dedicated servers so you never leak your IP address to other players. Brand new menu system. Our options menu is now available at all times as a controller connected menu. It is also context aware depending on which server and gamemode type mode you're connected to. New Weapons: Sniper Rifle, Shotgun, and Rocket Launcher. Public internet space station Lobby servers with onboard firing range, arena server lists, and hangar bay. Leaderboards and Ranked Mode games. Too many bug fixes to count. Massive improvements to server optimizations.